Oklahoma City Thunder and the Charlotte Hornets are two trending teams that will be taking each other on head-to-head on Thursday night (November 30th).

Both the Hornets and Thunder split their series last season each winning a game on the road. Their last home matchup resulted in a Charlotte Hornets victory in December, 116-103. Kemba Walker dropped 19 points and combined with Marvin Williams made seven of 13 attempts from beyond the arc.

On the other hand, a month later the OKC Thunder were able to defeat the Hornets 101-91, with Russell Westbrook playing lockdown defense while showing off his ability to score with 25 points, 10 rebounds, and seven assists.

The Oklahoma City Thunder started the season 0-4 winning their last two games against the Phoenix Suns and Los Angeles Clippers. The team lost those first fours game with starting point guard Russell Westbrook out of the lineup.

The Thunder are currently averaging 108.7 points a game this season which is slightly more than last seasons average of just 108.4 points a game.

Westbrook was still going through rehab because of surgery he had on his knee prior to the season. However, Westbrook missed just two games this season and since his return, the Thunder have gone 2-2.

This season, the Thunder decided to add former Atlanta Hawks point guard Dennis Schroder. Schroder is averaging 13.3 points a game through six games this season along with 6.3 assists. Schroder is currently shooting 33.7 percent from the field and 28.6% from behind the arc for the Thunder.

However, the Thunder are still looking to capture their first win on the road this season. 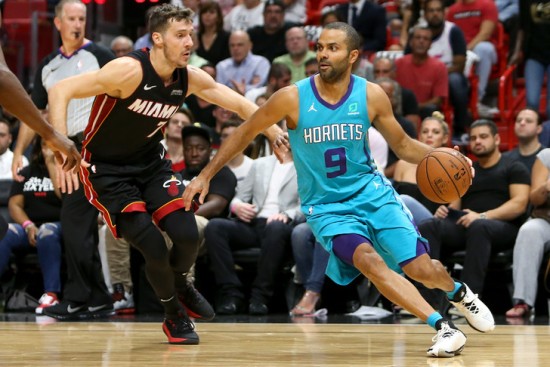 The Hornets are 2-1 at home this season with their only loss coming against the Milwaukee Bucks on opening night.

The Charlotte Hornets are currently averaging 114 points a game while showing their much-improved consistency this season. Compared to their season average last season, 108.2, the Hornets are scoring nearly six more points a game.

Through the first eight games of the season, the Hornets have been able to score at least 103 points a game.

The Hornets added a respected veteran point guard, Tony Parker, this past offseason. Parker is averaging just 9.4 points and 5.3 assists per game. But, Parker has shown his veteran leadership is a key component for the team’s success not only coming off the bench but in the locker room.

Tony Parker has been in the league for 17 seasons. Parker knows how to play the game and it has rubbed off on the guys around him. Being able to hit players in rhythm is a big factor in his success off the bench.

Hornet shooting guard Jeremy Lamb is quite familiar with the Thunder organization. Lamb started just eight games during his three-year career in Oklahoma and during that span averaged just seven points a game.

Lamb is currently a full-time starter for the Hornets after starting just 23 games for the organization during his first three seasons in Charlotte. Lamb is averaging 10.9 points a game while shooting an impressive 39% from beyond the arc.