Monday, October 8th kicks off Game 3 of the best-of-5 series between the New York Yankees and the Boston Red Sox.
The Boston Red Sox walked into Game 1 with a 108-54 record this season with 57 of those wins coming at Fenway. However, the Yankees have proven to be a strong team on the road as the club won 47 games on opponent grounds.
The Red Sox walked away with a Game 1 victory thanks to JD Martinez, who finished 2-for-4 with a run scored and three RBIs in the clubs 5-4 victory.
However, Game 2 was a much different story as Gary Sanchez finished 2-for-5 with two runs scored and four RBIs. Both of Sanchez’ hits during the game were home runs coming in the 2nd and 7th inning.
Game 3 is scheduled to begin at 7:40 PM at Yankee Stadium. The game will also be televised on TBS.

On the mound for the Red Sox is right-handed pitcher Nathan Eovaldi.
Eovaldi will be making his first career postseason start but his appearance is quite familiar to him. In 2016, Eovaldi needed Tommy John surgery but prior to the surgery, Eovaldi posted a 23-11 record with a 4.45 ERA for the Yankees. Through those 51 appearances, Eovaldi recorded a 10-5 record with a 3.70 ERA at Yankee Stadium.
However, this will mark Eovaldi’s first start since September 29th as he faced the Yankees in an 8-5 loss. Eovaldi pitched the first two innings of the game during that start.
This season, Eovaldi recorded a 6-7 record this season with a 3.81 ERA and 101 total strikeouts.
Offensively, JD Martinez and Mookie Betts need big games at the plate if the Red Sox look to avoid a second loss in the series.
Martinez finished 1-for-4 during Game 2 after finishing 2-for-4 with a run scored and three RBIs just a night before. However, this season, Martinez has been a true powerhouse offensively. Martinez is currently riding a .330 batting average while managing to record 130 RBIs and 43 HRs. His batting average placed him second behind teammate Betts while his RBI total ranked him ahead of everyone in the MLB.
Betts has gone 1-for-7 this postseason with a walk and a run scored. However, during the regular season, Betts led the Red Sox with a .346 batting average while managing to record 32 HRs and 80 RBIs. 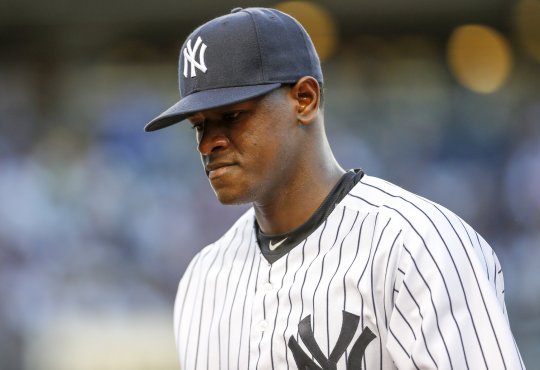 Taking the mound for the Yankees is right-handed pitcher Luis Severino.
Severino is familiar with the 2018 postseason after facing off against the Oakland Athletics in the wild-card game.
Severino allowed just two hits in five-plus innings during the Yankees 7-2 victory. During the regular season, Severino recorded 19 wins but managed a devastating 5-6 record after the All-Star break with a 5.57 ERA.
During the postseason, Severino holds a 1-1 recorded with a 4.50 ERA in five starts. However, during his career against the Red Sox, Severino is 2-2 with a 3.56 ERA.
Offensively, outfielders Giancarlo Stanton and Aaron Judge need to continue their momentum into Game 3.
Stanton successfully hit a home run against the Oakland Athletics in the wild-card game. The home run marked the first one of Stanton’s career in the postseason. However, against the Red Sox, Stanton has gone 2-for-10 with two runs scored.
During the season, Stanton managed a .266 batting average while also being able to record 38 HRs and 100 RBIs.
Aaron Judge, on the other hand, has currently gone 5-for-9 with three runs scored and two RBI during the first two games of the series. During the season is a completely different story. Judge, who dealt with injuries during the regular season, finished the season with a .278 batting average alongside 27 HRs and 67 RBIs.