One of my good friends Laieke Abebe (@StrikaNation24_) and I have agreed to break down our picks for week three of the NFL season.

Laieke Abebe: This will be a shootout that comes down to the last possession. It’s a toss-up with the Falcons’ various injuries. However, the Saints haven’t been good so far this season despite starting 1-1. If Tevin Coleman has another big performance, I like the Falcons to win a close game at home, 31-27.

Robert Wykowski: If the Falcons want to walk away with a win against the Saints it will strictly come down to how the Falcons stop Alvin Kamara and Michael Thomas. Thomas has nearly 300 yards receiving with three touchdowns while Falcons wide receiver Julio Jones has yet to record a touchdown this season. If Michael Thomas and Kamara continue to express their dominance offensively, the Saints will walk away with a big win on the road, 42-31.

Laieke Abebe: Carson Wentz returns from the ACL injury that kept him out of the lineup since December. The Eagles will be motivated to play well with him back in the lineup. While I think there will be some rust, Wentz should have a solid game and the Eagles secondary will bounce back from a bad performance against the Buccaneers last week. Andrew Luck will keep it close for the Colts, but ultimately the Eagles get out with the win, 27-21.

Robert Wykowski: Carson Wentz makes his return at the helm of the Eagles offense. Alongside getting their star quarterback back in action, the Eagles arguably have the best pass rushing unit in the NFL with Michael Bennett, Chris Long, Brandon Graham, and Derek Barnett to name a few. The Eagles will walk away with a solid victory at home, 24-13.

Laieke Abebe: Being without Joe Mixon will mean that Andy Dalton will have the pressure on his shoulders against a Panthers defense looking to bounce back from a tough game against the Falcons last week. Cam Newton had big numbers in that game, but he’ll need some help from his receivers in this one. Despite the injuries to the Bengals, I think their defense makes enough plays for them to upset the Panthers on the road, 24-20.

Robert Wykowski: The Bengals running game will be something to watch today against the Panthers. However, Andy Dalton looked phenomenal against the Baltimore Ravens with 265 yards and four touchdowns. Wide receiver A.J. Green is poised for another breakout game early on this season. If Green can express his dominance for yet another game, the Bengals walk away victorious, 35-28

Laieke Abebe: This game will be close, but as long as Aaron Rodgers is healthy enough to play, I’m likely not going to go against him. The Redskins third down offense and defense was bad against the Colts last week and I don’t see the Packers faltering in the red zone like they did against the Vikings. 31-24 Packers.

Robert Wykowski: I am excited to watch how Alex Smith and Vernon Davis take on the Green Bay Packers secondary. Both are very familiar with each other because of their time in San Francisco which allows the chemistry to already be at a peak. The Washington Redskins have a pretty impressive defense within the first couple week of the season. With Rodgers being banged up, I believe the Packers take a tough loss in week three, 28-24.

Laieke Abebe: I don’t know if you’ve heard, but Patrick Mahomes is lighting up the league to start the season. His 10 touchdown passes are the most through two games of a season in NFL history. Jimmy Garoppolo will likely bounce back against a bad Chiefs pass defense, but I think Mahomes makes enough plays for the Chiefs to continue their hot start. 38-34 Chiefs.

Robert Wykowski: Patrick Mahomes has brought an entirely different atmosphere to today matchup against the San Francisco 49ers. Mahomes has proven his ability and has lived up to the hype early on, but will his success continue? The 49ers don’t have the strongest secondary but they have a lot of key players within the linebacker core and defensive line. I think the 49ers defense gets the best of the Kansas City Chiefs on the road, 31-27. 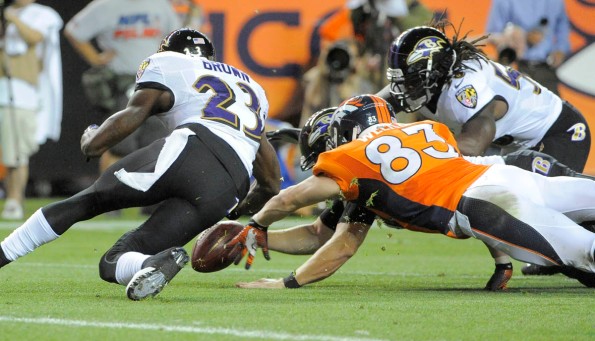 Laieke Abebe: Which Baltimore Ravens team will show up this week? We don’t know, but this game will be a test for both teams. The Broncos started 2-0 last year before losing their first game on the road. There will not be a repeat of that this season as long as Case Keenum doesn’t turn the ball over. 24-17 Broncos.

Robert Wykowski: The Denver Broncos need to figure something defensively after walking away from the first two weeks of the season with close victories. Two key members in the secondary with Chris Harris Jr. and Bradley Roby should create havoc for opposing quarterbacks. On the other end of the spectrum, the Baltimore Ravens have a lot of talent defensively and which was seen during the tour against the Bills in week one. If both defenses play to their potential it will likely end in overtime with the Broncos receiving their first loss, 35-24.

Laieke Abebe: As if the Buffalo Bills needed any more misery, they travel to face one of the best defenses in the league in Minnesota. If Kirk Cousins plays like he did last week against the Packers, the Vikings have a chance at a Super Bowl run. 35-20 Vikings.

Robert Wykowski: The Vikings walked away with a tie last weekend against the Packers. Now with a chip on their shoulders against the Buffalo Bills, a team still looking to find itself on both ends of the ball. This game could go one of both ways, either the Bills dominant offensively and walk away with a win or the Vikings defense is way too much for the Bills to handle. Bold but true, Vikings walk away victory, 35-24

Laieke Abebe: After a big win against the Patriots last week, the Jaguars are looking to avoid a hangover against a Titans team that has had their number over the last few seasons. However, with Marcus Mariota injured, Blaine Gabbert will continue to start for Tennessee. I find it hard to believe the Titans can pull off a shocker without Mariota and various offensive line injuries. 27-10 Jaguars.

Robert Wykowski: The Jaguars looked impressive last weekend against the Patriots. Bortles threw for nearly 400 yards and recorded four touchdowns. If the Jaguars can continue to find their groove offensively, this team could be scary good. Titans are without Marcus Mariota and have yet to see a wide receiver make a dominant impact for the offense. Jaguars walk away with a win, 42-31.

Laieke Abebe: Both teams come into this game 0-2 which means that it’s an early must-win situation for the Texans and Giants. I think the Texans running game will give them the edge against a Giants team searching for answers. A loss for either team would be devastating. 20-16 Texans.

Robert Wykowski: The Giants have seen a lot of impressive factors that Saquon Barkley has brought to the offense early on this season. The Giants also have a solid receiving group with Sterling Shepard, Odell Beckham Jr., and Evan Engram. If Barkley can make plays both within the run game and passing game over a talent Texans defense, the New York Giants will walk away with a huge win. 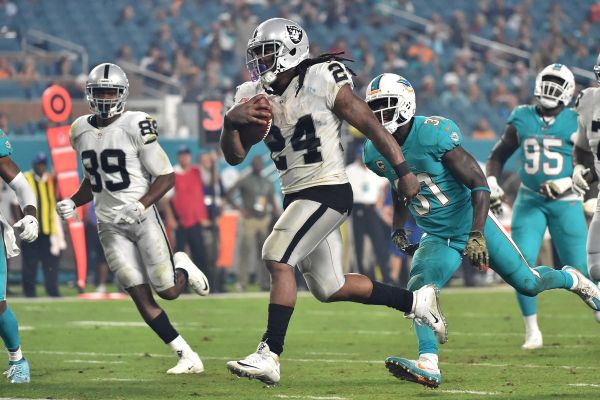 Laieke Abebe: This is a trap game for the Dolphins if they aren’t focused. The Raiders had a lead in Denver before ultimately falling to 0-2. While Derek Carr and the offense were clicking in week 2, I think the Dolphins secondary forces multiple turnovers and continues to be one of the surprises of the NFL so far. 26-21 Dolphins.

Robert Wykowski: The Raiders have an impressive receiving group and Marshawn Lynch is an overall tank for the running game. Although the defense has a lot of holes within the secondary, the defensive line will quickly be on the rise as the season continues. I think Carr and company get the best of the Miami Dolphins as Gruden gets his first win of the 2018 season, 28-14.

Laieke Abebe: Both offenses have scored a lot of points in the first two weeks. For the Chargers, the loss of Joey Bosa will continue to loom large. The defense of the Rams will be the reason why the Rams win the battle of Los Angeles and move to 3-0. 30-20 Rams.

Robert Wykowski: Battle of Los Angeles! This will be an exciting matchup but with the Rams stacked defense and overall impressive offense early on this season. I think the Rams will be far too much on both ends of the ball for the Chargers. Rams continue to remain undefeated, 28-21.

Laieke Abebe: After starting with two road games, the Seahawks return home to face a Cowboys team that has scored 28 points in two games. With Bobby Wagner coming back into the lineup, the Seahawks should win a close game and the trend of success in home openers will continue. 23-17 Seahawks.

Robert Wykowski: The Legion of Boom is no longer found in Seattle. Although the defense isn’t as successful as it has been in recent years, I believe that Russell Wilson carries the offense to a big victory against the Cowboys. Seahawks record their first win of the season at home, 35-30

Laieke Abebe: If the Cardinals are going to continue starting Sam Bradford, the Bears defense should feast in Arizona. The acquisition of Kahlil Mack is paying dividends so far. It’s been a while since the Bears were over .500, but they should be 2-1 after this weekend. 24-13 Bears.

Robert Wykowski: The Bears defense is arguably one of the best within the league. Kahlil Mack will continue to show his dominance much like he did against the Packers. With the Cardinals having a lot of key players out potentially, it will be tough for Bradford to succeed. Bears walk away victorious, 28-24.

Laieke Abebe: The Patriots go to Detroit to face off with their former defensive coordinator Matt Patricia for the first time. After a tough weekend in Jacksonville, the Patriots shouldn’t overlook the Lions. However, with the newly acquired Josh Gordon, the Patriots offense should have a bounce-back week in Detroit. 33-17 Patriots

Robert Wykowski: The Lions defense has been impressive when it comes to the number of sacks produced by linebackers. That trend will need to continue if the Lions want to walk away with a win. Hopefully, the injury report still has Josh Gordon listed as questionable due to a hamstring issue. If Gordan remains outcome game time, I believe the Lions get the most out of the Patriots based on key injuries. Lions walk away with a tough home victory, 35-31.