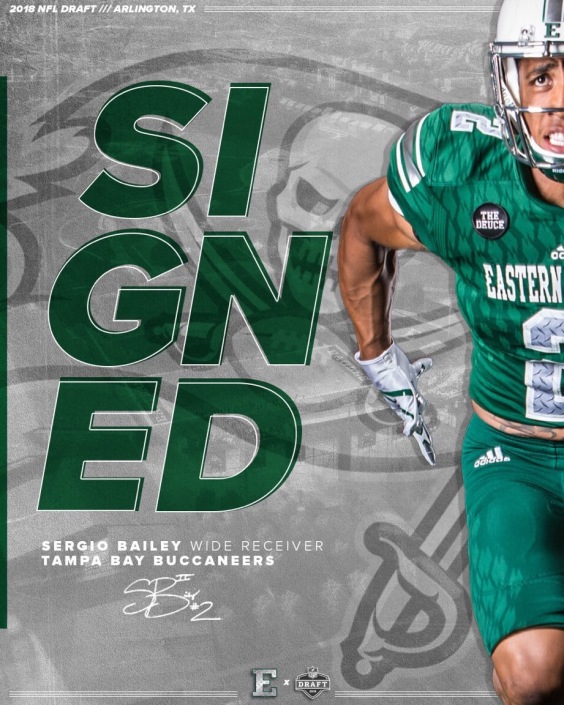 Because I focus more on the relationship aspect of getting to know these athletes, I was able to walk away in April as a friend of Bailey’s. Bailey has been really humble during this experience and has shown his personality while talking about the questions I decided to ask him.

Because of his collegiate success, Bailey gets the opportunity to continue playing football in the NFL as a member of the Tampa Bay Buccaneers.

I was curious about his experience in Tampa Bay after seeing countless pictures posted on social media by the Buccaneers showing Bailey making some spectacular catches during minicamp.

When asked about his experience at rookie camps and OTA’s, Bailey said, “I’m very humble and thankful for the opportunity. OTA’s and minicamp were a huge learning period for me. At this level it’s important for you to understand what everyone’s job is on the field. There’s great guys on the team and they’ve all took me in under their wings and helped me learn and grow as a wide receiver. With guys like Mike Evans, DeSean Jackson, Chris Goodwin, and Adam Humphries I couldn’t possibly ask for better veterans to set the tone and show me how everything is done the right way! I’m a sponge right now so I’m learning and growing and I love the process. God has the plan laid out already, my job is to follow it and stay positive.”

Veteran leadership is a huge role in any teams success. Evans and Jackson have had very strong careers and with their experience, they could really morph Bailey into the next dominant receiver on the Buccaneers roster.

Bailey has an incredible amount of skills. Watching his college film, you can see the speed and catching ability this young man possesses. Setting him apart from other receivers in the league is the determination and drive Bailey possesses. Constantly working on form and technique when he gets the chance. Not to mention studying the playbook on a routine basis as it becomes a big part of your life as you look to make an NFL roster.

I asked Bailey what his biggest take away was from camp and he said, “my biggest take away was understanding that your playbook is your new best-friend. Everyday new material is given so it’s important you study as much as you can and apply it to the field that next practice. My first couple days of learning were tough but now things are slowing down and I’m beginning to understand more.”

Goal are a huge part of everybody’s life and Sergio Bailey made sure to accomplish his early! I asked Bailey what his biggest goal was as he went from EMU to the NFL and he said, “my biggest goal overall is just to continue to grow as a person and as a football player. Throughout rookie minicamp and OTA’s I’ve had three online classes. I’m currently in two classes and in a couple weeks I’ll be done with my bachelors degree so I’m happy for that. My goal for pre-season and camp is to remain positive and make plays for my team.”

Many people don’t know this but at Olympian Highschool Bailey was teammates with the Lions cornerback/return specialist, Jamal Agnew. I learned about this after my first interview with Bailey and was told that Agnew was helping Bailey prepare for not only the draft but for his future in the NFL. I asked Bailey what advice Agnew gave him as he prepared for the NFL and he said, “Jamal is a brother man, as much as we compete and talk trash to one another you would assume we have animosity. It’s all love though, we grind together and we want the best for each other. Jamal mentioned to me when he got drafted that my time would come and he was right. Jamal’s advice has helped me out a lot, mostly it motivated me to be at my best and make plays when the opportunity is given. I’ll see Jamal in the pre-season so we are both excited about that.”

I know for me growing up playing soccer, family always meant everything to me and seeing the huge support system behind Bailey, not only at EMU but now in the NFL, I was curious about what that meant to him. I asked Bailey since god and family mean a lot to you and clearly your mom is your biggest fan, what does it mean to you to have that support system behind you? Bailey said, “God comes first to me no matter what, without God I wouldn’t be the person I am today and I give him all the thanks everyday for my ups and downs. I’m still working on a better me and I’m thankful to know who he is. My mom is a lover of the game and I appreciate her love and dedication towards me and whatever I pursue in life. My support base is everything. All the love and positive energy molds me into the person I am today. I am thankful and blessed to have support from my family and friends, they all keep me going. Thank you to all of them.”

Finally to cap off the interview I wanted to know what Bailey did during his down time when he wasn’t practicing or working out at the facility. Bailey said, “my favorite thing to do in Tampa Bay so far has been getting massages and eating good! My favorite food spot at this moment in Tampa is Bahama Breeze, coming from California it’s something new to me and I love it! I would also say I appreciate how nice the beaches are in Tampa and the people. Great city and great vibes for sure.”

Bailey is an outstanding human both on and off the field and because of that I have no doubt he will succeed in the league. People like Bailey deserve to be recognized for who they truly are as people rather than the athletes they are. Being able to show that within this interview was a huge part about why I do this. Providing a piece for fans of not only the Buccaneers but the NFL in general, my goal was for you to get to know the real Sergio Bailey and I think that was accomplished within the piece. Bailey has been a great friend throughout this experience and this will certainly not be the last time you hear about him! Be ready for this young man to take the league by storm!