I officially concluded the NFC conference articles on Tuesday which means we officially begin the AFC conference teams. The AFC West consists of the Denver Broncos, Oakland Raiders, Los Angeles Chargers and Kansas City Chiefs. I was a fan of two of these teams draft but the other two I feel completely different about because I don’t agree they hit team needs early.

Personally I would have been much more pleased with this draft if the Broncos would have addressed the quarterback situations. Case Keenum proved to be a good quarterback in the past but only inked a two year deal. Now I understand that may seem like the Broncos have some time to adjust and figure things out but drafting a rookie this season would have allowed for him to develop under Keenum for two seasons. Overall I was very pleased with both the Bradley Chubb and Courtland Sutton picks. Both allow the Broncos immediate help on both ends of the ball. Chubb has an outstanding mentor in Von Miller so I am really excited to watch the two of them this season.

I was a huge fan of the Raiders decision to bolster the offensive line. It allows for Derek Carr to be protected and hopefully allows him to play like himself again after battling injuries the last two seasons. The wide receivers are going to be my favorite thing to watch about the Raiders this season so draft Ateman didn’t make much sense to me but I could see him being like a special teams member. Hurst was a complete steal in the 5th round. Hurst has so much strength and athleticism is unbelievable. Pairing him with either Arden Key or PJ Hall will make for a dynamic pairing down the road.

Derwin James was an absolute steal at 17. James was the best safety in the draft and with the amount of talent he possess, he should be able to draft tight ends like Jared Cook and Travis Kelce with ease. Chargers finally found their Eric Weddle replacement I hope! Mwosu will make an immediate impact on defense for the Raiders. Mwosu will be able to not only hurry the quarterback and apply pressure but will also be able to use his quick hands and bat down passes. Drafting Quessenberry will help provided talent and depth on the offensive line while draft Jackson in the 7th gives the Chargers an immediate skillset on the field who can cause havoc out the gates. 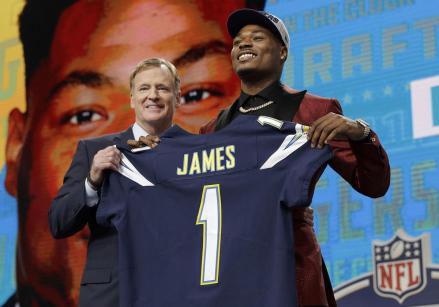 I loved the fact that the Chiefs absolutely bolstered the defense during the draft. Personally I would have preferred that they addressed the needs more on the offensive line. I love the pressure that both Nnadi and Speaks will bring immediately but wasn’t pleased with the way the Cheifs failed to fill the gapping hole in the left guard position. Mahomes will be the key to the success this franchise sees in the near future but will need a lot of help on the offensive line if he wants to succeed immediately. Watts and Smith could definitely help in the secondary but also could see them being used on special teams.