What a player Donovan Mitchell has become. Donovan Mitchell was the 13th pick out of Louisville in the 2017 NBA Draft. Mitchell has been exciting to watch all year and has been quite the offensive machine for the Utah Jazz. Mitchell led the Jazz to the postseason while he averaged 20.5 PPG. The Jazz have quite the talented roster and found success when many believed this wouldn’t be their year. Due to the success of Mitchell and his outstanding skill set, he was given the nickname Spida-Mitchell. Well the Jazz now have a 3-1 lead in the first round of the NBA playoffs against the Oklahoma City Thunder. The Utah Jazz succeeded all season long and with players like Mitchell, Rubio, and Gobert at the helm, what did you expect?

As of right now Donovan Mitchell scored 110 total points in the series through the first four games and his best game came during game four when he dropped 33. Mitchell is currently averaging 27.5 PPG in the postseason. 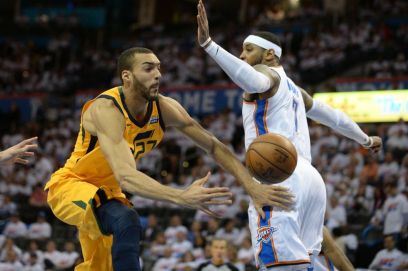 I could talk about Donovan Mitchell much more, but lets recap what we saw last night during game four. The Utah Jazz have won the past three straight games after losing game one of the series. Can they win the series and advance on Wednesday night? 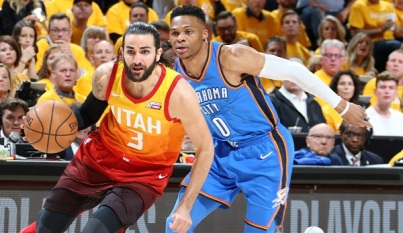 So far the Utah Jazz have assembled Captain Rubio, Spida-Mitchell and the rest of their Avengers squad to take down the Oklahoma City Thunder in the opening round. The Jazz won game four 113-96 as Mitchell dropped 33 points. The last two games for the Utah Jazz have been successful because of a second quarter surge that carried over into the second half. The Jazz went on a 20-3 run that spanned from the end of the 2nd quarter into the beginning of the 3rd. The offense woke up when Gobert was seen cutting to the basket for a dunk, which meant the Jazz scored on 11 straight possessions. Ingles fueled the offense by adding three straight 3-pointers which put the Utah Jazz in front 58-52 at halftime. After the 20-3 run the Utah Jazz had a 67-52 lead. Joe Ingles has proven to be a viable force for the team after he dropped 20 points while hitting five 3-pointers. Spida-Mitchell was in full swing as he played aggressive basketball and attacked the rim numerous times causing the Thunder to panic and play on their heels. Ricky Rubio added 13 points, 8 assists, and 6 rebounds, Rudy Gobert added 16 points and 10 rebounds and Derrick Favors scored 13 as well.