I have been a fan of both the Timberwolves and Rockets all season so picking a team to cheer for this offseason was a tough decision. Since James Harden has been a member of the Rockets I have been a huge fan. On the other hand, I was a big fan of Jimmy Butler when he was in Chicago and followed him this past offseason to Minnesota. Both of these players are very important people on their respected teams.

The Timberwolves pulled within one game in the series behind Jimmy Butler who scored 28 points and Jeff Teague who had 23 points. The Timberwolves also hit 15 three-pointers during Saturdays win which, thanks to a powerful crowd, was their first playoff win since 2004. The Timberwolves were not a strong three point team this season as they hit the fewest 3s per game during the regular season.

The Houston Rockets, on the other hand, are one of the strongest three point shooting teams in the NBA and led the regular season in 3s per game. The Timberwolves seemed to find their groove during Game three and much of the success on defense came because Karl-Anthony Towns continuously engaged defenders down low and Taj Gibson played impressive one-on-one defense against James Harden. The Rockets shot 47.5% from the field in the second half but had seven turnovers and shot 31.6% from 3. If the Rockets want to come away on top they will have to figure themselves out defensively. If they play defense like they did during the first two games of the series when they held the Timberwolves to 91.5 points per game and to shooting 38.8% from the field during Game two. 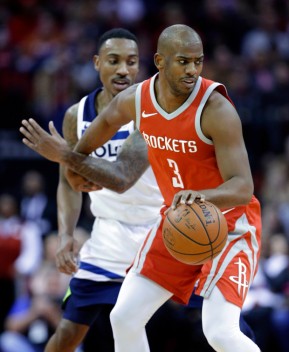