Filip Forsberg of the Nashville Predators had a beautiful set of skills last night when he passed the puck to himself through his own legs as well as Avalanche defensemen Samuel Girard while on his way to his second goal during the 3rd period. Eventually the Predators went on to win Game 1 of the first round series of the Western Conference. Nashville put together a strong performance during Game 1 after they won the President’s Trophy this season. Though this year is different from last season, the Predators look to take the next step and win the Stanley Cup after they lost to the Pittsburgh Penguins just a year ago.

Colorado made a strong attempt during the 1st period as this has been the first time they have been in the postseason since 2014. Austin Watson stepped up for the Predators as he had both a goal and an assist. Watson had help from his teammates as both Smith and Sissons found the back of the net for the Predators along with the two goals from Forsberg. As for the Colorado Avalanche, both Zadorov and Comeau were able to score. Overall, the Predators have won 11 straight games over the Avalanche. The Avalanche just barely squeaked in the playoffs as it came down to the last regular season game against the St. Louis Blues. The Colorado Avalanche have 14 total players with playoff experience and Colin Wilson has the most playoff experience after spending last season with the Predators. The Predators started the game off with a sloppy start as Rinne misjudged Zadorov’s wrister that allowed the Avalanche to score on their first official shot.

Goalies:
Pekka Rinne, though allowing 2 goals during the game, was able to make 25 saves. Bernier allowed 4 goals and was able to record 26 saves. 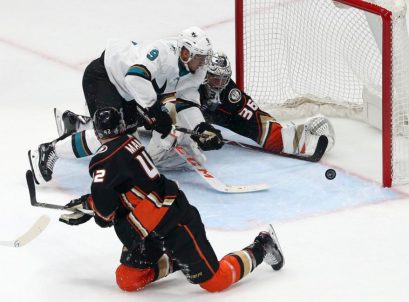 The Sharks recently acquired Evander Kane from the Sabres just 6 weeks prior to the postseason. During his first eight seasons in the league, Kane has had to watch the playoffs from his couch but knew from the start that if he got the opportunity to prove himself in a much different postseason atmosphere that he would thrive. Kane scored two goals in his first career playoff game after he spent time in Atlanta, Winnipeg, and Buffalo. After a scoreless first period, Kane capitalized on the opportunity given to him by two straight penalties that gave the Sharks a two man advantage. Kane received a pass from Joe Pavelski and scored in the slot with nobody around him. Kane became just the fourth player within the last 20 years to score multiple times in his postseason debut.

However, both of these teams are familiar with the postseason after each of them have seen experience within the last 15 years but this is only the second time that the two face each other in the playoffs. Though the Ducks lost the home opener for the third consecutive postseason series. The Ducks have won 7 straight home games to finish the season but did experience one loss in regulation just once in 17 games since January. Just three players remain on each teams roster following the 2009 playoff matchup when the Ducks upset the President’s Trophy Sharks in 6 games. One player from each team that remain on roster are their captains Ryan Getzlaf for the Ducks and Joe Pavelski for the Sharks.

Goalies:
Martin Jones completed the shutout while recording 25 saves in Game 1. John Gibson though allowing 3 goals was able to record 31 saves to finish the game with a .912 save percentage.