As many already know, the Utah Jazz clinched a playoff spot with two regular season games remaining when they defeated the Los Angeles Lakers 112-97 on Sunday. The Jazz have completed an amazing run as they were nine games below .500 in January. Will Utah be able to keep the momentum and make a run in the postseason?

This game means a lot to the Jazz as they have a chance to claim the No. 3 seed in the Western Conference along with the season sweep against the Warriors if they can win tonight.

Currently the Portland Trailblazers hold the No. 3 seed and are a game ahead of the Jazz. Those two will be facing each other during the last game of the season on Wednesday night.

The last two games of the season could be a difference maker for the Jazz.

The Jazz saw Rudy Gobert return to the lineup in January after he had missed 26 games due to knee injuries. Utah has really stepped up on both ends of the court as they have an offensive efficiency of 108.5 and lead the league with a defensive efficiency of 97.6 since January.

Donovan Mitchell has been a difference maker for the Jazz offense this season. Mitchell is just the 5th rookie to lead his team to the playoffs as the scoring leader as he joined Carmelo Anthony, David Robinson, Chuck Person, and Michael Jordan.

Key to a Jazz Victory:
Be dominate on both ends of the court. Gobert has proven to be a defensive monster and because of the this teammates have risen to the occasion. Mitchell and Rubio have proven to be a good combo on offense and if they continues to work together they could become a 3 seed and make a run in the playoffs.

The Utah Jazz and Golden State Warriors met recently when the Warriors traveled to Salt Lake City and experienced a rather eye opening loss to the Jazz when they fell 129-99. Golden State has been dealing with a lot of injuries throughout the season and recently the Warriors snapped a two game losing streak when they beat the Phoenix Suns 117-100 on Sunday. Out of the last 16 games the Warriors have lost 9 of those games.

The Warriors allowed both the Pacers and Pelicans to score 126 points in back-to-back games. The Pacers shot 54% from the field and 52% from beyond the arc while the Pelicans shot 56% from the field.

During the Warriors game against the Jazz in January the Jazz shot 50% from the arc and 58% from the field. With the defensive effort pretty much extinct during those games the Jazz had numerous players average double figures while Donovan Mitchell lead the pack with 20.5 PPG and 3 steals.

Key to a Warriors Victory:
Warriors need to find their momentum again and fix the defense. They need to compete at a higher level on defense and that means they need to get into the passing lanes and box out. Back to back losses where teams shooting 50% or more from the field does not look good. If they can fix and improve their defense within the final two games of the season they have a chance to make it deep into the Playoffs. 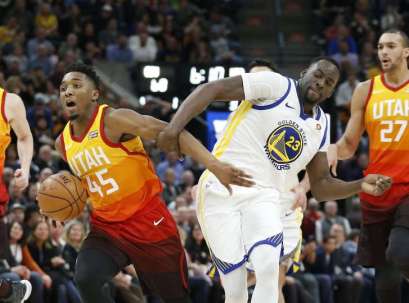