Fred Lawrence (#1) was a defensive back for Angelo State University. Lawrence attended Abilene Cooper High School in Abilene, Texas. During his junior season, Lawrence had 53 tackles, 9 pass break ups, and two kickoff returns for touchdowns as a junior. As a senior, Lawrence recorded 71 tackles, 4 interceptions, 8 tackles for loss, 2 forced fumbles, 2 fumble recoveries and 17 pass breakups. Lawrence was also able to return two kick off returns and one punt return for a touchdown. Lawrence was two-time First Team All-District and Honorable Mention All-State as a senior. 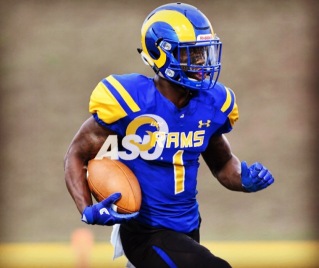 Lawrence mentioned he went up against some great receivers during his collegiate career. When asked how his toughest matchup was, Lawrence says, “it would have to be from my freshman year against Ricky Collins who graduated from Commerce that year.” Collins got picked up from Green Bay following that season and is currently in the Canadian League. Lawrence said Collins was a physical receiver to guard and was one of fastest guys that he’s had to play against.

Lawrence is currently training to participate in the Angelo State Pro Day as he looks to impress NFL scouts one final time prior to the 2018 NFL Draft. Lawrence explained his main focus and said, “my main focus is my explosion and trying to work on my 40.” People often say that the 40 will make of break your draft stock. Lawrence said he has been running a lot of hills and doing explosion workouts and fixing the little technique issues he has. Lawrence has prove to be an essential asset both on the defense and during special teams. Lawrence times the play very well and it often results in a deflected pass or an interceptions. With his quick hands and fast feet, Lawrence is able to stay with the receiver and avoids being beat.