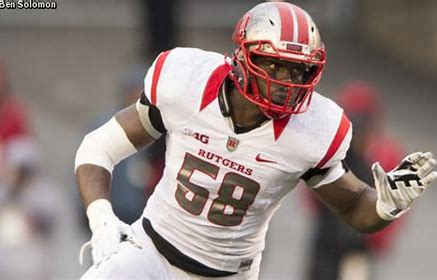 Kemoko Turay (#58) played as a defensive end for Rutgers University. Turay grew up in Newark, New Jersey and attended Barringer High School. Turay did not play football his sophomore or junior year but led New Jersey with 19 sacks as a senior. Turay was named to Third Team All-State Selection by Star-Ledger. Rated at a three star recruit by Scouts.com and as a senior, Turay recorded 105 tackles, 28 tackles for loss, 19 sacks and four forced fumbles. Turay was a track and field champion in both the long jump and triple jump as a junior. Turay was also apart of his high schools basketball program.

Turay had a very successful career playing at Rutgers. Though being redshirted in 2013, Turay saw a lot of playing time in 2014 and took full advantage of the opportunity. In 2014, Turay played 13 games at defensive end and recorded 26 total tackles (15 solo), 8.5 tackles for loss, 1 pass deflection, 7.5 sacks and 3 blocked kicks. Turay was a Scout Freshman All-American Second Team Selection as well as earning a spot on the Big Ten Network All-Freshman Team. Turay finished off his collegiate career with 103 tackles (54 solo), 20.5 tackles for loss, 4 pass deflections, 1 forced fumble, 3 fumble recoveries, 3 blocked kicks and 15.5 sacks. Due to the success in college Turay was invited to participate both in the Senior Bowl and in the NFL Scouting Combine. Turay commented about his start at Rutgers and said, “after spending summer camp learning linebacker position, I was able to prove myself as a defensive end in a scrimmage and after three sacks in a row the coach was like this is what you’re really good at and we’re going to put you at hybrid defensive end.”

Turay’s most memorable experience with the Rutgers came during his freshman season in 2014 against the University of Michigan. Turay explains, “This was the first season that Rutgers was a part of the Big 10 and I was never apart of the atmosphere were the entire stadium [High Points] was packed and I be able to block the field goal and prevent Michigan from winning.” This was a surreal moment for Turay as he has watched moments like this before but was never able to experience something like it prior to this game. 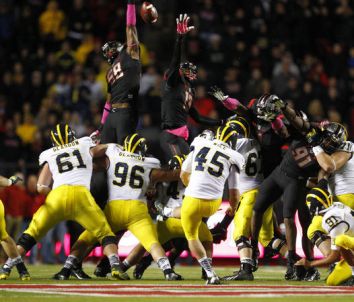 Turay was honored with the opportunity to participate in the 2018 NFL Scouting Combine. Prior to the combine Turay was training in Pensacola, Florida. Turay commented on his focus and said, “I’m trying to keep my technique down pat and having the coaches teach us what is going to be going on at the combine and the rules.” Even though Turay battled many shoulder injuries throughout his collegiate career, NFL scouts gave him a 5.87 prospect rating which means that Turay has a chance of becoming an NFL starter. Although, Turay experienced a hamstring injury during the combine, he was able to run a 4.65 40-yard dash prior to the injury.