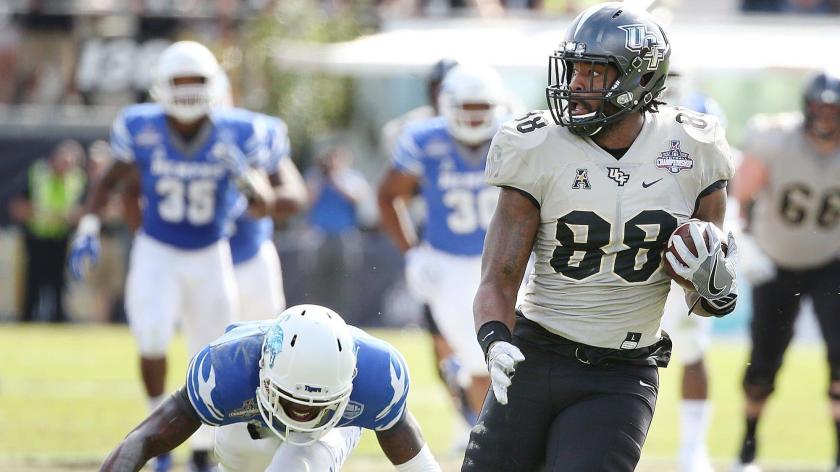 Jordan Akins (#88) played as a tight end for the University of Central Florida. Akins grew up in Atlanta, Georgia and attended both Strong Rock Christian High School and Union Grove High School. During his junior year at Strong Rock Christian, Akins threw for 823 yards and 12 touchdowns as well as rushing for 784 yards and 14 touchdowns to earn All-State Honors. Akins was a part of the 2010 MLB Draft and was taken by the Texas Rangers in the 3rd round. In 2011, Akins had a .218 BA as an outfielder during his four years in the Texas farm system. During his span in the minor leagues Akins had 24 homeruns and 42 stolen bases.

Following his minor league career, Akins went back to the University of Central Florida to partake as a member of the football program. Akins began his football career during the Croke Park Classic against Penn State in 2014. During that game Akins had 5 returns for 142 yards. Akins finished his first year back on the gridiron with 12 catches for 135 yards and had 15 returns for 363 yards. Akins made the transition to tight end following the 2015 season. In 2016 Akins saw time in 13 games and made 7 starts. Akins finished his junior campaign with 23 receptions for 347 yards (15.1 per catch) and had two touchdowns. In 2017, Akins was on the John Mackey Award Watch List and started in 11 games. Akins had 30 catches for 459 yards and four touchdowns which are all career highs. Akins averaged 15.3 yards per reception and 41.7 yards per game. Akins reflected on his experience at Central Florida and said, “I am grateful for the great coaching staff. They came in and did everything right and gave us the best chance to win.”

Akins said his toughest makeup came against Auburn’s Trey Matthews in 2017. Akins commented saying, “I knew the linebackers were more pass rushing and I knew the safeties were really good.” Akins also went on to mention that he knew Matthews was going to play him in man coverage. Akins had to use every technique he knew whether it be from speed or from strength. Akins went on to have 2 receptions for 56 yards in that game. Akins had a good lean and comes out of the snap low. Atkins has shown good acceleration out of the snap prior to the development of the route and has shown his speed down field when creating separation from linebackers. 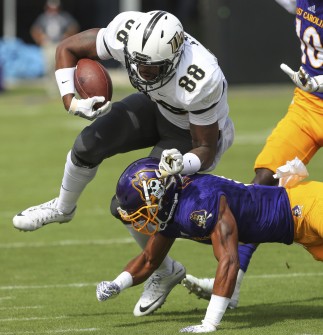 Due to his success on the field, Akins was invited to participate in the NFL Scouting Combine. Akins said, “being invited to the combine is a huge honor, it was something I worked towards since I stepped foot on the college field.” Though Akins suffered a hamstring injury prior to testing, Akins his confident he will be able to participate in his schools Pro Day. During the measurement part of the Combine, Akins is 6’3” and weighed in at 249 lbs. His arms measured in at 32 ½” and his hands measured in at 9 ½”.