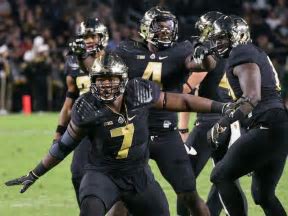 Eddy Wilson (#7 and #18) played as a defensive tackle for the Purdue University . Wilson grew up in Pontiac, Michigan, but attended West Bloomfield High School. Wilson was a three star recruit by ESPN, 247Sports.com and Rivals.com. Due to his success in high school, Wilson was ranked as the No. 18 defensive tackle in the state of Michigan and ranked No. 95 in the nation per ESPN. Wilson was a three year varsity player and recorded 52 tackles, 12 tackles for loss, and 13 sacks. Wilson was also a part of the varsity track team and was All-State in shot put.

Wilson had a very successful career playing at Purdue. Wilson saw immediate time as he appeared in 9 games as a reserve. Wilson finished the 2015 season with 10 tackles (4 solo) and a pass break up. In 2016, Wilson started 8 games while appearing in 10 where he was able to record 36 tackles (21 solo), 6 tackles for loss, 2.5 sacks, and recovered a fumble. Wilson had a season high with 8 tackles and a tackle for loss against Iowa on October 15th 2016. In 2017, during his junior season, Wilson saw time in 12 games and was able to record 27 total tackles (14 solo), 2.5 tackles for loss, 1 sack, and 2 pass deflections. Wilson explained his experience by saying, “it was just rough and emotional and one thing I never let waver was the amount of effort and work that I put into the game. The work you put in will always reciprocate whether it is on the field or off the field.”

Wilson said his toughest matchup came against Wisconsin in 2017. Wilson said “athletically those guys are the best and individually they are the best, but together they work insanely good.” Wilson had 3 solo stops against Wisconsin is a 9-17 loss. Wilson said his most memorable game came against Iowa. Wilson explains, “we knew we were going to upset them since we landed in Iowa City.” Purdue went on to defeat Iowa 24-15 and Wilson had 2 tackles, 1 sack, 1 tackle for loss, and 1 pass deflection. Wilson has the ability to shed blocks and create pressure. His use of hands and footwork allows Wilson to collapse the gaps to stop big plays from happening.

Wilson recently finished his training for the NFL Scouting Combine and said his focus throughout the process was doing speed work, agility work, as well as participating in an individual period which is meant to represent a mini camp. Wilson stands at 6’4” and weighs 304 lbs. and his arms measure out to 33 7/8” and hands measured 9 3/8”. During the tests, Wilson did 26 reps on bench and had a broad jump of 96 inches. Wilson was also able to run the 40 yard dash in 5.37 secs.