Dre Hall (#10) played wide receiver for North Alabama University. Hall attended Columbia Central High School in Columbia, Tennessee. During Hall’s high school career he helped lead the Lions to three state playoff appearances and won the championship in 2010. The senior class had the most successful record in school history going 47-9. Hall won MVP of the district as well as All-State and All-Mid State Honors in 2011 and 2012. Hall set records as a senior with 74 receptions for 1,286 receiving yards and 11 touchdowns. He also holds single game records such as 12 receptions for 184 receiving yards. In total, Hall holds 11 single game records at Columbia Central. Hall lettered in both track and basketball as well. 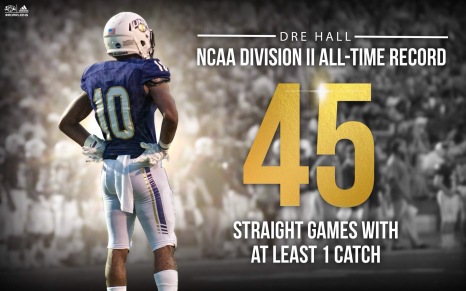 Hall said his toughest matchup was with his teammates. Hall explains, “I honestly felt like I had an opponent on the opposite side of the field from me.” Hall mentions that the offense at UNA often struggles due to the problems at the quarterback position and that opposing teams knew this heading into games. Hall continues to say that his matchup against teammates such at Maurice Carnell IV and Dorsey Norris applied pressure and pushed him to be the best he possibly could each and every practice.

Hall is currently training in Columbia, Tennessee at Steel Athletes run by Thalas Steel. Hall is focusing on improving many aspects of his game as he prepares to wow NFL scouts during his Pro Day. Hall said, “for my pro day I am focusing on everything there is not anything I think I cant get better at.” He is focusing on things such as his explosiveness for his forty yard dash start, bench press, and staying low and keeping his hips up under him during the shuttle run. Hall commented on his experience at Steel Athletes saying, “I have been working with him since last summer and I felt like he got me better going into my senior season so why not go back to somebody you are comfortable with to keep getting you better.”