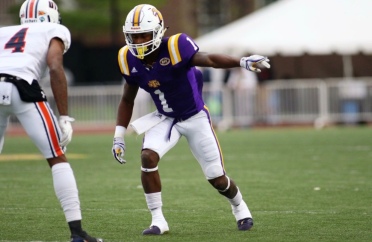 Byrd had a very successful career while at Tennessee Tech. Byrd spent time playing at the University of Louisville before transferring to Tennessee Tech. Byrd said “when I got to Tech I turned things up a notch and worked harder because my edge is what drives me to be the best.” Byrd had a two year career at Tennessee Tech and during that span he totaled 152 receptions, 1,936 receiving yards, 809 kick return yards, and 15 total touchdowns. One of his career games came against Murray State where he had 14 receptions for 198 yards and 2 touchdowns. Byrd showed off his skills during a kickoff return against Mercer University where he exploded out and evaded defenders as he returned the ball 100 yards for a touchdown. Byrd knew that after his junior year when he put up 933 yards that teams would focus in on him senior year. Byrd spent a lot of his time watching film and would often study other receivers. In his short career at Tennessee Tech, Byrd was able to put his name in the record books.
Byrd is currently training at Ignition in Mason, Ohio, as he prepares for the Combine/Pro Day. Byrd had the ability to play in the NFLPA Bowl in California. He is currently working to prepare for himself the combine. His focus is trying to work on the little things that could help him bring his game to the next level. Byrd is a talented receiver with quick hands and fast feet. Finding success for him as he makes the leap into the NFL shouldn’t be hard.

Byrd said his toughest matchup came against Sirean Neal from Jacksonville State. Neal is a very long corner standing at 6’3 and pressed nearly every snap. Byrd said “I knew coming into that game that it was going to be a very physical game and that I wasn’t going to have a free release off the ball.” Byrd took the time to focus on different releases against press coverage which helped him dominate during the game. Byrd ended up having 6 receptions for 92 yards and a touchdown against Jacksonville State. Byrd showed off his speed and downfield skills as he hauled in a 56 yard touchdown pass from Andre Sale late in the game.